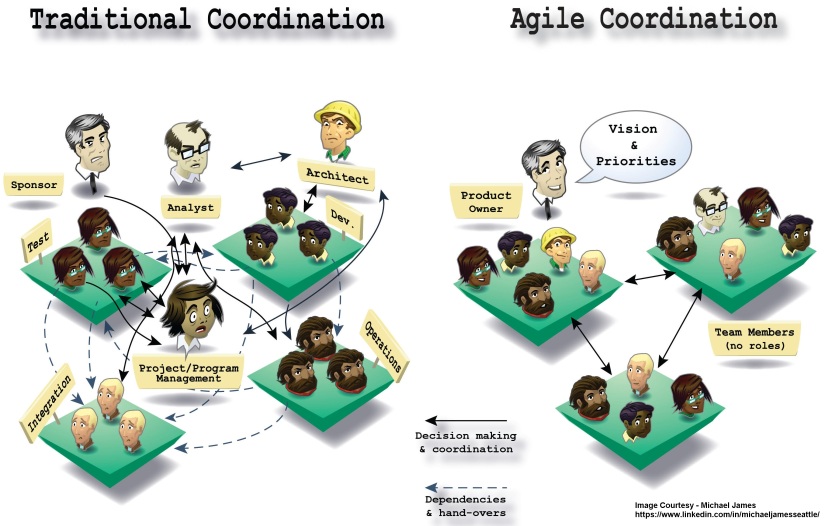 When multiple Development Teams (henceforth teams) are involved in building a product using Scrum, they have to coordinate to build ONE product increment. In most cases, this means that they have to have some sort of coordination between them to ensure that all features work seamlessly so that the “Increment” is releasable at the end of the Sprint. The need for coordination arises due to reasons like (a) lack of specific technical/ product knowledge by a Development Team (b) private code bases – only one team can access the code base and check into it (c) fragile and brittle code – lack of proper automated tests (technical debt) makes it impossible for any team to do the work. Only the team that knows the code base can work on it (d) Teams building components (e.g. middleware team, data warehousing team) instead of building end-to-end customer centric features (e) align teams and ensure that everyone is going in the same direction

The need for coordination between Development Teams create tight coupling and slows everybody down (and the organization stops to be “Agile”), not to mention it creates a lot of waste in the organization (e.g. adding specialists role for coordination) . Many of the problems associated with coordination are avoidable by creating cross functional feature teams (e.g. using a feature team adoption map), creating internal open source code base (so that anyone can check-in code) and by having robust eXtreme Programming technical practices. However, some coordination is unavoidable (e.g. two teams checking code into the same area of the source code). In cases where coordination between teams is necessary, it is imperative that the Scrum Master does not become the coordinator (rather the team members have to coordinate amongst themselves). Why ?

Acknowledgements: Thank you Michael James for granting me permission to use your image in my article

View all posts by Ram Srinivasan